I wasn't in the station long enough to use it but my laptop picked up a signal from Wifi_Rail_BART at the Embarcadero BART station. Hmmm... perhaps this is a new service that BART is rolling out. Now if they'd just install access points uplinked to EVDO connections on the trains, that'd be awesome! I'd heard that there were RFP's out last year from Amtrak to provide WiMax to the Capitol Corridor line, that's cool. But there's a much larger population of BART riders who I'd imagine would be as grateful as I would be to read feeds, mail ...and access source control.

I've been using social software for a few decades now. It started with dial-up BBS' (300 baud modems worked pretty good when you had tweets of text) and compuserve (user ID's were numbers and commas, IIRC). In the 1990's I used usenet and The WeLL to great delight, chagrin and all sorts of other things. In all of these goings about, the motivations to participate have ranged from voyeuristic curiosity, to chit-chatting and connecting, to utilitarian knowledge sharing, to being of service to others, to showing off in front of others or something else altogether social.

Lately, it seems to me that the blogosphere is buckling under the corrosive forces of greed. You can't trust voices to be authentic. PR firms and marketing departments are hiring bloggers or ghost writing for pretenders. You have buffoons (who may describe themselves as a "Dot Com Moguls") selling links to other blogs with prices based on their Technorati and Alexa ranks. There are all of these schemes like ReviewMe, Algoco and PayPerPost twisting our trust of the things we read. Is that blogger really talking about a great bike or was there some payola slipped in to pimp it? I don't know. My cynicism rises (further).

What's a "pro blogger" anyway? Are folks really discussing or dialing for dollars? SEO is increasingly turning publishing into a perverse sport. If I wanted to watch infomercials, Comcast is already piping a couple of hundred channels of crap through the coax in my living room, I could passively drink the nonsense all day if that's what I wanted.

But that's not what I want. It's a total cluetrain derailment. Instead of using social media to empower meme sharing and synthesis, as a way to expand the collective consciousness, I'm seeing it turned into another exploitation ploy.

Our country is in a brain-dead war, podcasts are published, urban public schools are in shambles, photos are being uploaded, illiteracy is rampant, a funny thing happened at the dog park, baseball season is starting soon, technology innovations are blossoming in our midsts, pandemics threaten us every flu season, tuition is going up (again), omega-3 fatty acids, look at this video of a 4-way tricycle collision, Osama is still who-the-hell-knows-where, Dick Cheney is still satan, Jimi Hendrix is still god, god is still dead, lives are beginning and ending all around us... lives are being lived. The rhythmic thrum of life, that's what I want.

(Disclosure: there are links on this site from AdSense and Amazon. They don't do much for me but then, I don't think they should, that's not why I blog. If you click 'em: thanks, maybe I'll get pizza next week)

Putting a few ads or Amazon links to benefit from the accidental tourist that Google sends you from time to time is one thing. Superficially making it the object of your publishing is just, well, bullshit!

BTW, this is not necessarily the opinion of my employer. In fact, it's probably not. I may be a cynical bastard but this is my authentic voice. You can't buy it.

But that's not a recording you'd take with you.

However, you can buy a recording of the performance directly from the artist, Charlie Hunter Trio: Recorded live at Yoshi's in Oakland, CA (12/15/2006). I confess to knowing little about Fast Atmosphere. But I do know the media establishment needs a severe beating with a clue-stick. Providing services for recording artists that enhances their ability to sell their creations directly to their audience sounds like an appropriate truncheon. Fast Atmosphere has other Charlie Hunter recordings (and more names you might know, like Norah Jones and others you might not), check them out and support direct-sale art.

Next time Charlie Hunter stops at Yoshi's, I'm there. 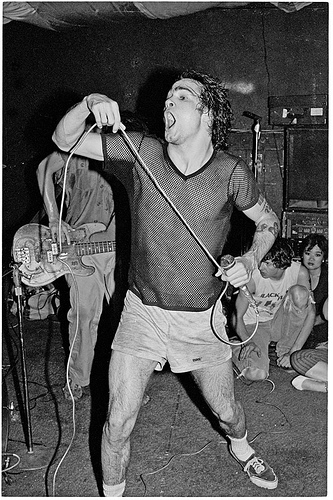 1979: Black Flag played at the Temple Beautiful
2007: Henry Rollins is on Twitter

Do you ever meet somebody who reminds you of someone else and have to remind yourself, "No, don't mix up the two"? An odd moment fell upon me when I accidentally found myself watching Some Kind of Monster on TV the other night. There was a flashback. And then a flashforward. Ya see, when I was a teenager, our crowd, we hated the music industry and wanted to subvert it by any means necessary. Disco music and the just-following-orders spineless vermin that ran the press establishment and radio stations (the program managers) amused and sickened us. I had a radio show on KUSF and actively tapped underground music scenes, looking for that undiscovered stroke of worldchanging noise. Perhaps my efforts of the last 15 years or so building applications on the web are an extension of the same jaded disdain I have for the media establishments. They're in-bred pay-for-play following-orders brain-washers. Let me tell you how I really feel. Complacency is not an option. 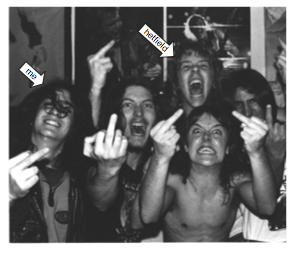 I haven't seen them for a few years but when the lot of us were teenagers, I used to fervantly headbang with my pals in Metallica. They lived in a house on Carlson Street in El Cerrito. We drank a lot. And listened to New Wave of British Heavy Metal acts like Tank and Angelwitch. And though they weren't Britons, we listened to a lot of Merciful Fate, too. Here's a picture of us, long straggly hair, pimples, listening to Venom no doubt and expressing a whole cargo ship full of fervor. 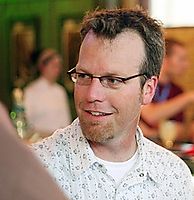 Fast forward to the 21st century. In the past few years, I've run into Jeff Veen a number of times in professional and social situations. I don't hob-nob in the web 2.0 "scene" much but when I do, there's Veen. He's not famous for too-loud/too-fast/too-go-f*k-yerself sounds of pummeling. He's not famous for alienating fans trading his goods on peer to peer networks. But he's known for his web design sophistication. He's usually a bit happier, too. See, look at the picture. Happy guy!

What does Jeff Veen have to do with James Hetfield? "He looks like James Hetfield of Metallica." I mean, they both have first names that start with "J". Coincidence? I think not. 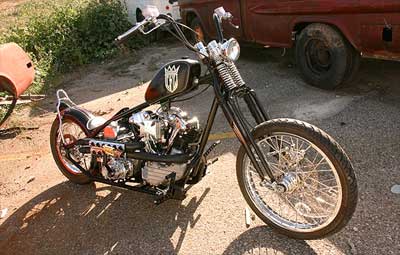 Hetfield rides tricked out choppers. I don't make it to San Rafael much except to visit Bubbe (I hope I make it through the long haul the way she has!). But if I lived in San Rafael I'd probably run into Hetfield all over the place; our kids are similar ages so we'd probably share Thin Lizzy on a boombox while the offspringlings are in the sandbox. When I was living in The City, I'd run into Kirk Hammett all of the time (like, the vegetable isle at Whole Foods). 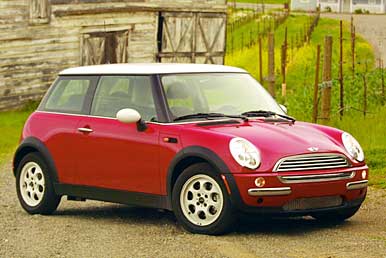 On the other hand, I work in the South-of-Market part of The City and Veen is oft spotted tooling around in a mini-cooper. I don't think he's into Merciful Fate or Thin Lizzy. But then, I've never asked him. 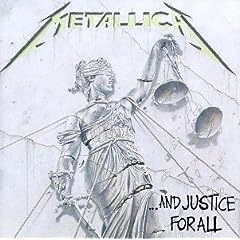 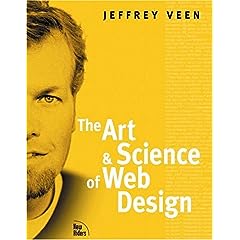 Hetfield goes on stage and exhorts about anger, misery and suffering. 50 thousand pairs of finger-and-pinkie horns are raised in response. And 50 bucks will get you a t-shirt. 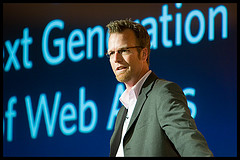 Veen goes on stage, dressed a little smarter and discusses design principles. 50 million web pages get their style sheets revised (a subject I'm inept with, judging from my markup skillz). I don't know about the web design merchandising potential, would you pay 50 bucks for a microformats t-shirt?

Hetfield doodles on his guitars. 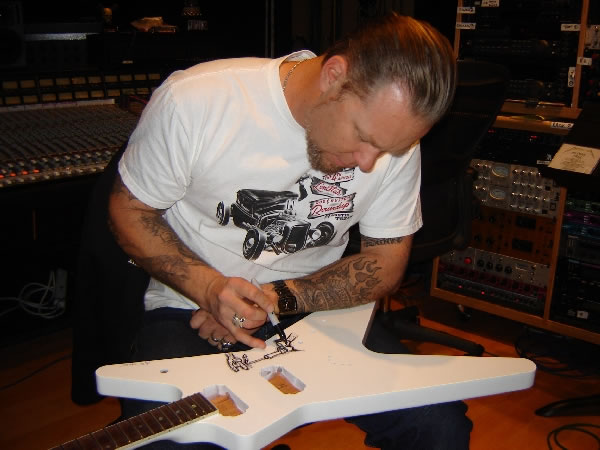 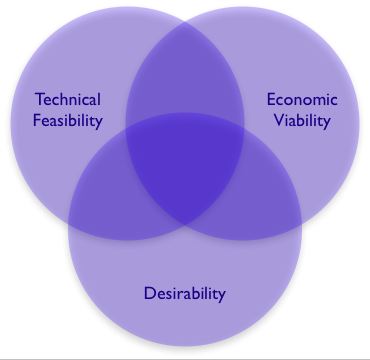 So they're about the same height and share some conversational mannerisms. Maybe their hairlines are about the same. The spectacles and goatee look might do it, too. But (rational voice) these guys are nothing alike and the context I know them from are completely different. And yet the introverted sensing part of me always draws the association when I run into one of them face to face or flipping TV channels and stumbling upon VH1; there is the odd familiarity of Hetfield when I run into Veen. I should invite Veen to share a bottle of stolichnaya and crank up Black Sabbath to see how he takes to it, maybe it'd just come naturally.

Silly grins. Coincidence? I think not. 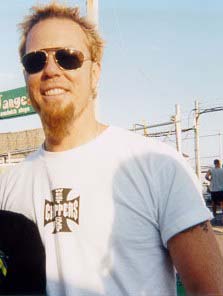 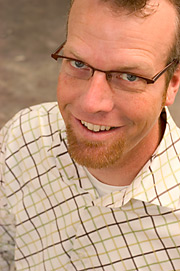 Of course, Metallica did change the music industry. But it changed them, too. And damn, I've got it coming and going: young enough to get pimples still but old enough to be all salt-n-peppa gray on top. OK, 'nuf musing. Back to subversion.

Clocks have received (or are overdue for) day-light savings time adjustments, flags with Matt Cain and Barry Bonds are on the lamp posts of 3rd Street, kids are at play; recreational softball/baseball on the weekend and Odyssey of the Mind state championships are coming up. The hills are green and blossoms and blooms abound. Spring has sprung.

Have a nice day!