Everyone knows what a great product Movable Type is. But if you find yourself in care of a Movable Type deployment that nobody seems to be able to login to with superuser privileges, it may seem pretty hopeless; if you need to perform privileged operations, especially if the installation is backended by a sleepycat, er, Oracle BerkelyDB database, the data is somewhat opaque. AFAIK, MT doesn't seem to ship with any "break glass with this little hammer if the superuser was hit by a bus" contingencies and with BerkelyDB there's no SQL command prompt; in fact, the only way to dig into it is to write some code. So I was fiddling with just such a MT-3.33 installation; I had an account but not much in the way of privileges. After opening the BerkeleyDB files with DB_File, dumping contents with Data::Dumper and going through some of the MT libraries, I found what I was looking for. Here's the Perl I hacked up to grant myself superuser privileges:

For other fixes to Movable Installations, consider MT-Medic.

As I announced on the Technorati Weblog, we rolled out support for blog claiming with OpenID. I'm really proud of the work that Chris and the team have done to make this a reality. If you're not familiar with OpenID, here is one good place to start. Sure, I'm well aware of the concerns about phishy user interface vulnerabilities. The idea of logging in without a password may seem weird.

One weird thing, for new users, is that instead of logging into an OpenID-using site (like Zooomr) with a user name and password, you just give it your personal OpenID URL -- and no password. Then your browser pops over to your authenticating site (like myopenid.com) to verify that you want to use your persona on the new site. This is bound to initially confuse people, and since users may not be asked for a password, it can also appear to be less secure, although it is not.
ZDNet: OpenID has a potential cure for Website password overload - Rafe Needleman

Frankly, I'm not certain what the best resolutions are for those concerns. However I'm more comfortable with adopting OpenID "as-is" and evolving as the technology advances then sitting around waiting for it to be perfected. Welcome to now.

Distributed identity ideas have been gestating for a long time while identity cathedrals have been built and fallen. If your blog is your voice, your URL can be your identity.

Whenever I look at page to page, post to post, blog to blog and domain to domain relationship statistics (and permutations across them) interesting things often emerge. Microsoft's Live Search recently released a linkfromdomain operator that can help dig into these linking relationships. For instance, linkfromdomain:arachna.com ruby returns the pages that I've linked to that have ruby in the text. Combined with the site operator, I can do a search of the pages I've linked to on Technorati with linkfromdomain:arachna.com site:technorati.com.

Looks like the blogosphere is noticing, within the last two days Technorati has seen 57 links to the linkfromdomain announcement blog post. Kudos to MSN's search team for a cool innovation.

One apparent problem with their crawls is javascript/flash-plugin handling, the site:youtube.com linkfromdomain:technorati.com SERP shows pages referenced from Technorati's most linked-to YouTube videos, however all of the SERP items have the text

Hello, you either have JavaScript turned off or an old version of Macromedia's Flash Player. Click here to get the latest flash player.

heh!
Anyway, combine programmatic access (you can get a feed of that search with this

link) with these link operators and Live Search is a very powerful and useful product. Read more about it on Live Search's WebLog

This was on NASA's Astronomy Picture Of The Day site a few days ago, I haven't been able to close the browser tab with it... I just keep gazing at the surreality of it. 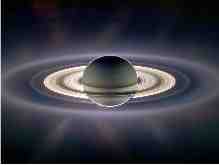 In the shadow of Saturn, unexpected wonders appear. The robotic Cassini spacecraft now orbiting Saturn recently drifted in giant planet's shadow for about 12 hours and looked back toward the eclipsed Sun. Cassini saw a view unlike any other. First, the night side of Saturn is seen to be partly lit by light reflected from its own majestic ring system. read on

NASA goes on to explain that the eclipse revealed newly detected strata of rings around Saturn.

Between Google's extensive use of employee shuttles, their green data centers proposal last month and yesterday's announcement Google to Convert HQ to Solar Power, I'm really impressed with the ecologically conscientious initiatives they're taking! Personal note: the solar installation will be led by Energy Innovations, EI president Andrew Beebe is a friend from years ago who I've long lost touch with but I was very pleased to see his name associated to this project.

It's broadly appreciated how scaling up is usually driven by business demand, but the requirements for scaling down are rarely as appreciated. Questions about how web 2.0 business scale up abound these days. As the challenges of service growth and business plans stress technical infrastructure, startups try to squeeze everything they can out of their architecture with a number of widely accepted practices. However, scaling considerations for the other direction are oft neglected.

Why should you be thinking about scaling down?

Every time I see a system that's hard to test, has sysadmins overwhelmed or are not meeting business objectives and has to be reeled in, I'm reminded of the importance of thinking about scaling in both directions. No, I haven't read the book yet but as someone burdened with too much stuff at home, I've got it on my list.